Spanish Beginner Lessons for Children You will learn to communicate with sufficient confidence in everyday situations. The objective of this course are to learn how to introduce yourself, describe, give your opinion on a topic and ask for things....
Read More

Discover a brand new way of searching for programs

After months of hard work and dedication, we are very excited to announce the launch of our new platform that makes it really fast to search for programs and events.
Interested in finding the right program for you?  Go to our Programs tab, use the filters and search bar.

Youth Programs and Things To Do

The mind-body practices of tai chi and qi gong have numerous health benefits. These gentle movement classes will benefit your physical, emotional and mental health. Anyone can experience these low-impact, low-to-moderate intensity movements, regardless of your current fitness level. Give it a try today!

Fridays 1:00 PM-2:15 PM
As we move through time, we need to keep moving our bodies. Whether you’re brand new to yoga or a seasoned practitioner, this all-levels yoga class is ideal for you. Yoga can improve your flexibility, mobility, balance, bone density, and strength.

Section 14.3 of the Joint Operating Agreement between the Douglas Park Community Association and the Vancouver Board of Parks and Recreation requires the Society, prior to the end of the first year of the term to develop a plan to spend and/or keep...
Read More

The Wednesday Social Club for people with disabilities for 19+ years old has been meeting at Douglas Park Community Centre since 1968. Enjoy a variety of activities, including games, sing-a-longs, crafts, movies and guest speakers. There will be...
Read More

Registration begins online on Tuesday March 7, 2023 @ 7:00pm There is a $100 refundable deposit paid at time of registration if you are successful in securing a spot. This is refunded at time of withdrawal. There are 10 spots available for children...
Read More
Home » ABOUT

The mission of the DPCA is to improve the quality of life for the Douglas Park Community.

Under its constitution, the purpose of the DPCA is:

Originally part of the Point Grey Municipality before the city was amalgamated in 1929, this park was first established in 1926 through a money bylaw. The name was decided upon through a community competition and is in commemoration of Sir James Douglas, first Governor of the Colony of British Columbia.

Before being designated a park, this area was a logging camp in the 1870s and was later a grazing site for elk. In 1882 the acreage became the site for the first market garden south of False Creek.

In December of 1964 a local improvement money bylaw was passed allowing construction of a new $100,000 recreation facility at the park which has evolved, over many decades, into Douglas Park Community Centre.

Located near the centre of Douglas Park’s tree-lined 13 acres, the community centre offers a wide range of programs for all ages but with a strong focus on preschool and school age activities. New programming for youth has resulted in a featured skateboard activity along with expanded offerings for seniors and people with disabilities. A half gymnasium, popular exercise room and numerous activity rooms round out this facility’s recreational agenda. 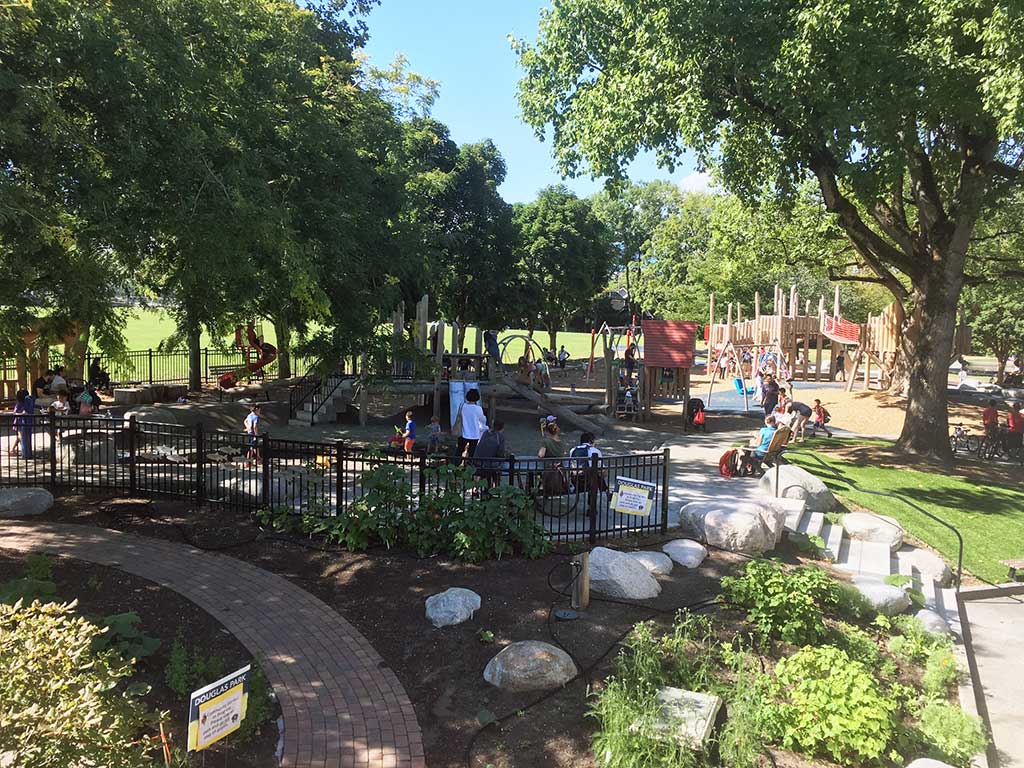 The DPCA is run by volunteer directors elected by members of the DPCA each year at the annual general meeting and is governed by three sets of rules and regulations:

1. The Society Act (British Columbia);
2. The DPCA Constitution and By-Laws; and
3. The Joint Operating Agreement with the Vancouver Park Board.

A Joint Operating Agreement (the “JOA”) signed on March 19, 1979 defines the working relationship that exists between the Vancouver Park Board and the community associations, including the DPCA.

Role of the Vancouver Park Board